After the historical Buddha’s death and parinirvana, it is believed that a meeting of senior monks was convened to discuss how to maintain the Buddha’s teaching. This First Buddhist Council was a pivotal event in Buddhist history that, legend says, impacts how Buddhism is remembered and taught to this day.

The First Buddhist Council is also called the Council of Rajagrha, because the council was said to have been held at the entrance of Sattapanni Cave, in Rajagrha, which today is called Rajgir. This community is in the modern-day Bihar state in northeastern India, bordering Nepal. The Council was held three months after the Buddha died, but exactly when that was is not clear. Historians believe it was some time in the 5th century BCE. 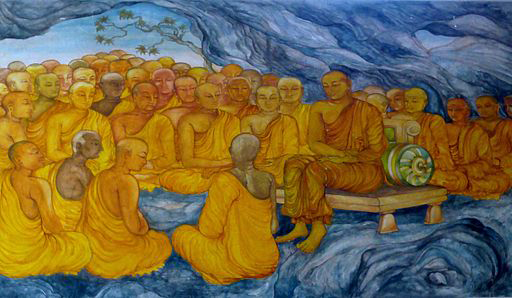 The significance of the First Council is that it settled on the the canon of teachings collected in the Sutta-pitaka and the Vinaya, the rules of the monastic order. Historians today don’t believe the versions of these collections of texts we have today were actually finalized that soon, however. Perhaps only some preliminary “settling” was done.

Did the First Buddhist Council actually happen? I do not believe there is any contemporary documentation or archaeological evidence that corroborates Buddhist accounts, which mostly come from a section of the Pali Vinaya called the Cullavagga. I have read histories that say some sort of meeting probably did take place, while other historians are not sure.

What follows is how the story of the Council is remembered in Buddhism.

The Council Is Called

The Council was called by the disciple Mahakasyapa, sometimes referred to as Kasyapa. Shortly after the Buddha’s death, Mahakasyapa was startled to hear a monk named Subhadda say that, at least, now they wouldn’t have to follow the Buddha’s strict rules.

Of the monks called to the meeting, the participation of one was iffy. Ananda, who had been the Buddha’s attendant in the last years of his life, was not yet enlightened. The night before the Council was to begin, Ananda sat in meditation through the night and was enlightened by morning.

The Pali word translated as “council” is sangiti, which more literally means “communal recitation.” According to historian Damien Keown, this suggests the monks did not discuss and debate doctrine. Instead, they recited.

A disciple of the Buddha’s named Upali was called upon to recite the rules for the monastic order, which would be collected into the Vinaya-pitaka, or “basket of discipline.” Upali had been a low-caste barber who met the Buddha when he was asked to cut the Buddha’s hair. Some years later, when he became the Buddha’s disciple, the Buddha treated him as an equal of the highest-caste monks.

Upali repaid the Buddha for his courtesy by learning and keeping the Precepts. As the expert on rules, he was not always popular with other monastics. Once when the Buddha heard that Upali had been treated disrespectfully by other followers, he gave them all a lecture on the importance of the Precepts.

By the time of the Council Upali was in his 70s, and at first he declined Mahakasyapa’s invitation to the Council. But Mahakasyapa implored him to come, and so he relented and presented a recitation of the rules for the monastic orders. After this recitation the monks in attendance agreed that this rules as Upali had recited them were correct.

Then it was Ananda’s turn. As has already been said, Ananda had been the Buddha’s attendant in the last several years of his life and had spent more time with him than anyone else. Ananda was also the Buddha’s cousin and known for his ability to remember everything he heard.

Ananda proceeded to recite all of the Buddha’s sermons from memory, which would have taken several days. And, not to be picky, but Ananda was a great deal younger than the Buddha and hadn’t been around for his early sermons. In any event, Ananda’s recitation was accepted as accurate by the other monks.Finally, the monks agreed on how the Vinaya and Sutta-pitaka were to be organized.

The Vinaya and Sutta-pitaka were memorized and chanted by generations of monks before being committed to writing. Eventually the Abhidharma or Abhidhamma would be added to this canon to make up the Tipitika, or “three baskets,” that remain the main body of scriptures for Theravada Buddhism.