Wonhyo (617-686) was a major patriarch of Korean Buddhism. Wonhyo is credited with bringing Pure Land Buddhism to Korea, but his written commentaries made an impact on many schools of Buddhism throughout eastern Asia.

Buddhism reached Korea in 372 CE, when a Chinese monk arrived bearing sutras and images of the Buddha. At that time, Korea was divided into three kingdoms, called Silla, Baekje and Goguryeo. Buddhism became the official religion of Silla during the reign of King Pophung (514-539). In time Silla came to dominate the other kingdoms, and in 668 — when Wonhyo was about 51 years old — Silla had conquered the other kingdoms and controlled most of the Korean Peninsula.

So it was that Wonhyo lived during a time of dynamic change. He was born into a simple family during the Three Kingdoms Period, in what is now the city of Gyeongsan, which was in the Kingdom of Silla. He lived to see the beginning of what was called the Unified Silla Period.

This was also a time of change within Korean Buddhism. In particular, Korean monks and scholars were questioning and assessing doctrinal coherence. For some time Korean monks had been traveling to China to study, bringing teachings of the many emerging schools of China back home. But these emerging schools didn’t always agree with each other.

When Wonhyo was a young monk, he and his friend Uisang decided to go to China to study Buddhism. On the way they were caught in a terrible rainstorm. Stumbling around in the dark, the two monks were relieved to find an abandoned shelter. Inside, the thirsty Wonhyo found a gourd filled with rainwater and drank his fill.

In the morning light, however, Wonhyo saw that the shelter was a tomb, the gourd was part of a skull, and the rainwater was rancid.  Wonhyo then had a powerful realization of how his mind created his perception of reality. 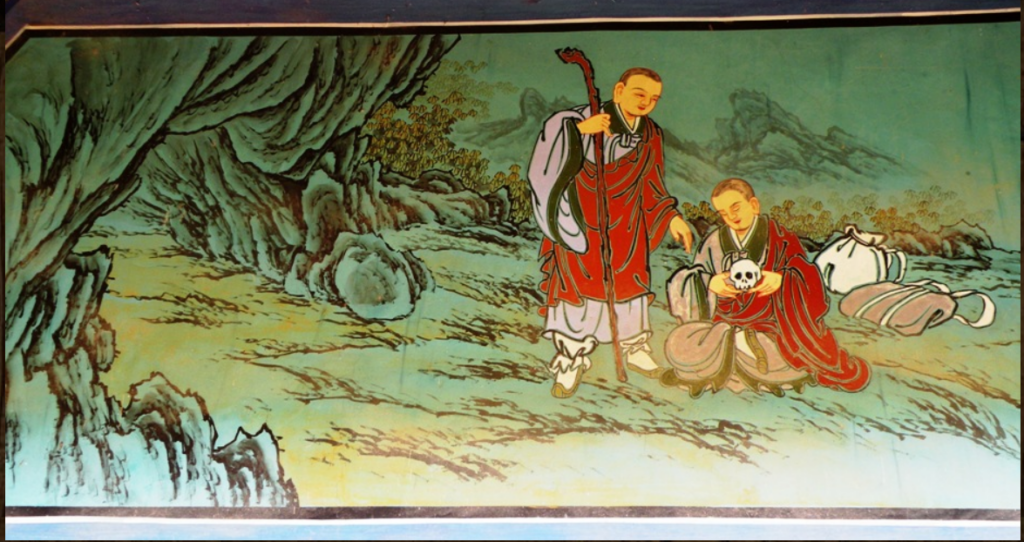 After this experience, Wonhyo chose not to continue to China. Instead, he devoted himself to living among laypeople to spread the buddha dharma. His methods — his upaya — included leading people in song and dance as an expression of harmony in everyday life.

He also chose to live as a layman and was no longer a monk. The circumstances of this decision involve a princess of Silla named Yosok. According to legend, Yosok became enamored of Wonhyo when she heard him speak, and the King of Silla compelled Wonhyo to marry her. She conceived a son who became a renowned scholar of Confucianism. However, Wonhyo did not live with his princess for very long. Instead he chose to continue his teaching mission.

Wonhyo taught Pure Land practices to laypeople. Pure Land primarily is a devotional practice of chanting homage to Amitabha Buddha in order to be reborn in the Pure Land, a place where the realization of enlightenment is more easily accomplished. Note thatt he Pure Land can be understood as a state of mind, not just a physical place. Pure Land remains the most popular form of Buddhism in eastern Asia because it can be more easily incorporated into busy family life than many other forms of Buddhism.

Wonhyo as Author and Scholar

Wonhyo was particularly interested in doctrinal coherence, and he surveyed the schools that had been transmitted to Korea, including Hyayan, Tiantai and Ch’an (Zen) as well as Pure Land. He systematically presented these diverse schools in a larger framework of Buddhist teaching to resolve their differences. The result is called Tongbulgyo or T’ong pulgyo, which means “interpenetrated Buddhism.”

Wonhyo was the author of more than 80 works, Some these became influential in China and Japan as well as Korea. Of particular note are his commentaries on the Avatamsaka Sutra, the Nirvana Sutra and the Mahayana-sraddhotpada-sastra (“Awakening of Faith”).

This was originally published at About.com, now Dotdash. Since it is no longer hosted at Dotdash, copyright reverts to me.