I recommend Sean McElwee’s article at Salon, “What we really talk about when we talk about religion.” Citing the recent Harris-Maher-Affleck “debate” on the culpability of Islam in violence, McElwee writes,

At the core of this debate is the extent to which the religion of Islam is responsible for the violence of ISIS, and other atrocities often committed in the name of god. But the problem with such debates, as I’ve argued previously, is that they mistake cause and effect. Religious belief is ultimately historically contingent: Religious beliefs, like cultural beliefs, are shaped by the material circumstances that give rise to them.

Those, such as Maher and Harris, who wish to defend “liberalism” against the tyranny of “religious fanaticism” are attempting to shift the blame from actual historical circumstances to ephemeral ideologies.  Should we blame the rise of ISIS on “religious fanaticism,” or on the failed 2003 invasion of Iraq, the de-Baathification policy, the disbanding of the Iraqi army and the disastrous regime of Nouri al-Maliki? Furthermore, there is a long history of colonial oppression, military aggression and economic hegemony. These complaints, as well as historical grievances relating back to the Crusades, inform the views of radicals like Osama bin Laden. …

… This leads to the core delusion pushed by the Maher/Harris/Dawkins “New Atheist” team: that religion exists independently of social, political and economic systems, and that religion influences these structures. In fact, the opposite is true: Religion is largely the handmaiden of economic and political power. It is fluid, able to mold to whatever needs are suited to those wielding it.

I made the same argument in Rethinking Religion. If you look closely and objectively at incidents of religious violence throughout history, you see it’s never just about religion. More often it’s really about politics, or greed, or colonialism, or some other thing, and religion is just the packaging.

Even when the violence appears primarily motivated by religious beliefs, there’s something else going on beneath the surface that is pushing people to become, shall we say, aggressively pro-active about those beliefs. Psychologically healthy people who are reasonably content with their lives and not feeling particularly aggrieved about anything cannot be incited into violence by scriptures and sermons alone. And I believe this is true even if such persons are very devout. However, people who are angry, afraid, or nursing some sort of fanatical grievance are another story.

McElwee also makes a good point at our tendency to misinterpret the causes of violence.

The criticism of “radical Islam” in fact bears resemblance to another dodge today. In the wake of usurpation, violence and plunder, white Americans look at blacks and worry about “cultural pathologies,” where only economic deprivation exists. At the core, the fallacy is the same — ascribing a negative culture to an oppressed and maligned group. 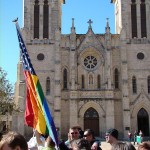 That said, there is probably no group of people more likely to become dangerous than religious fanatics — and any religion will do —  nursing a grievance. I wrote in the last post about the fanatical grievance growing among some Christian conservatives in the U.S., who interpret interference with their discrimination against others as discrimination against them.  Christian conservatives assume rights of tribal dominance and demand that government carve out for them exclusive discrimination privileges not extended to other groups. And if they don’t get what they want, they think they are the victims.

In Rethinking Religion I propose that most group violence comes about when a mass movement bears both a holy cause and a fanatical grievance. The “holy cause” doesn’t have to be religion. It could be nationalism — especially belief in a glorious national identity — or a belief in racial superiority, or a lot of other things. But a holy cause by itself usually doesn’t cause people to become violent, especially if there’s a way they can work within the system to get what they want. It’s the fanatical grievance that pushes people over the edge.

That’s why the Christian Right’s obsessive, fanatical belief in its own victimization — the myth of Christian oppression in the U.S. — is seriously dangerous. If fanatical right-wing Christians in the U.S. become more and more frustrated with the system, and feel it is no longer responding to them, some of them could very easily become violent. The elements are there.  I doubt such violence would be as extreme or widespread as has happened in Islamic countries, but not because Islam per se is more violent than Christianity per se. The difference would not be religion, but that the U.S. hasn’t been invaded by foreign armies or subjected to colonial oppression, at least not for more than a couple of centuries.  Being forced to sell a wedding cake to a gay couple is not quite in the same league as foreign occupation. But fanaticism is still fanaticism.

Whether it’s liberal college professors supposedly turning kids to Marxism or gay people who are accused of recruiting, over and over you hear the claim that the children of conservatives are in serious danger of being talked into everything from voting for Democrats to getting gay-married. …

… I think I know where conservatives get the idea that other people are sneaking around trying to indoctrinate children into unthinking ideologies. It’s because they themselves are totally guilty of it, both in terms of trying to recruit other people’s children and trying to frighten their own children about the dangers of exploring thoughts outside of the ones approved by their own rigid ideologies.

Marcotte provides several examples, from a group operating in Portland pubic parks that entices children with games and then teaches them about Hell, to the growing “home schooling” movement that encourages parents to keep their kids out of public school so they won’t be exposed to any but an extremist, right-wing religious ideology.

You can trace the anti-public school hysteria back to Brown v. Board of Ed. (1954). Before court-ordered school desegregation, even (white) conservative Bible Belt parents thought public school was one of the great things about America, and only those idol-worshiping Papists sent kids to parochial schools. After Brown, however, suddenly public school education was no good.

Parents yanked their kids out of public school and sent them to all-white “Christian academies,” which sprang up suddenly like mushrooms after the rain. The first voucher programs began then, so that tax dollars could follow the white children into their new white schools. But when the private schools also had to desegregate to survive, the home schooling movement was born.

By now, the home schoolers probably don’t consciously associate home schooling with racial segregation. Their “cause” has morphed into a general mistrust of mainstream America.

Karen Armstrong, who writes about religious history and fundamentalist movements around the world, defines fundamentalism in a broad sense as a reaction against and rejection of modern Western society. Fundamentalists, in different ways, all attempt to establish enclaves of pure faith that shut out any other views. Those they come in contact with who aren’t “them” must be assimilated. And in time, if that doesn’t work, they must be eliminated.

There are two chapters in Rethinking Religion dedicated to religious mass movements and religious violence. These chapter propose that the two factors always present in violent mass movements are a holy cause — defending the faith against those they think are its enemies, in this case — combined with a fanatical grievance, or the belief they’re the ones who are the victims. You see this in violent Islam, in the violent Buddhists in Myanmar, and also in mass movements that are not expressly religious. If religion isn’t the “holy cause,” sometimes belief in a glorious national or racial destiny will do nicely as well.

Buy the Book at Amazon

The “Christian Right” in America definitely shows all the symptoms that lead to violence. They are obsessed with the belief they are being persecuted and are surrounded by enemies. A growing subculture of ignorant religious fanatics could prove to be a huge and violent threat eventually. I’m not sure what to do about it, but it’s not healthy.