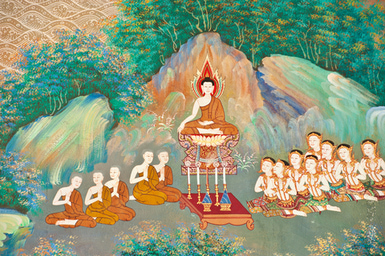 The Pali Tipitika, the scriptural canon of Theravada Buddhism, isn’t famous for its humor. But at least one story in the Sutta-pitaka still inspires chuckles.

The Cula-Saccaka Sutta (Majjhima Nikaya 35) describes a debate between the Buddha and a character named Saccaka, who is addressed as Aggivessana, a reference to his family. Saccaka was famous for his debating skills; he was also, as we might say today, full of himself.

He bragged to his followers that anyone foolish enough to debate him was soon reduced to a quivering mess, dripping sweat from his armpits.

When Saccaka heard the Buddha was nearby, he vowed to thoroughly trounce him in debate. He would drag him, shake him, and thump him, Saccaka promised.

In particular, Saccaka wanted to debate the Buddha about the skandhas and the self. The Buddha taught that the skandhas — form, sensation, perception, discrimination/fabrication, awareness/consciousness — were not the self, and Saccaka disagreed. He believed these things were exactly the self, and he was certain he could show the world he was right and the Buddha was wrong.

So Saccaka and his followers found the Buddha, and after exchanging greetings and preliminaries Saccaka said, “Yes, Master Gotama, I’m saying that ‘Form is my self, feeling is my self, perception is my self, fabrications are my self, consciousness is my self.’ As does this great multitude.”

“What does the great multitude have to do with anything?” the Buddha replied. “Please make your own assertion.” Saccaka repeated, “Form is my self, feeling is my self, perception is my self, fabrications are my self, consciousness is my self.”

The Buddha’s next question was, “What do you think, Aggivessana? When you say, ‘Form is my self,’ do you wield power over that form: ‘May my form be thus, may my form not be thus’?”

The Buddha’s point is that the skandhas are not the self because they are not subject to the mastery of the self. You cannot will your hair to change color or your vision to improve.

What cannot be brought under one’s complete mastery or control cannot be identified as “my self.”

And at this point Saccaka realized he had just lost the debate, so he refused to answer. When he refused to answer a second time, a spirit named Vajrapani appeared in the air over Saccaka’s head. Some of you might recognize Vajrapani as the name of a transcendent or iconic bodhisattva of Mahayana Buddhism. He is also a dharmapala, or dharma protector, in Tibetan Buddhism. But this sutta dates to a time before Mahayana, and he is identified in Pali as a yakkha, which is a type of being that is more fortunate than a hungry ghost but not as exalted as a deva (“god”).

The name Vajrapani means “vajra in hand,” and indeed, Vajrapani carried an “iron thunderbolt,” or vajra, in this usage a weapon also associated with the Hindu deity Indra. Later, in Mahayana Buddhism, vajra would become the name of a ritual object representing the wisdom of sunyata, or emptiness.

Vajrapani threatened to split Saccaka’s head into seven pieces if he didn’t answer the question. Some western scholars have interpreted this as a literal death threat, but splitting heads into various numbers of pieces comes up occasionally in old Buddhist texts, and in context it usually refers to some kind of mental breakdown, not death. For example, in the Candima Sutta of the Pali Tipitika, a character named Rahu had seized another character named Candima but was compelled to let her go, saying, “If I had not released Candima my head would have split into seven pieces. While yet I live, I should have had no happiness.”

There is a kind of existential threat implied here, but it is not to Saccaka’s body. The “threat” is to his understanding of self — his self-identity and his ego.

The terrified Saccaka looked to the Buddha for refuge and thereby accepted his teaching on the nature of the self. Thus it was that the Buddha won the debate. He then gave Saccaka teachings so that he would better understand what had just happened. And later, the Buddha indulged in a bit of fun with Saccaka. The Buddha was not shaking, he said, and not dripping sweat from his armpits, and he opened his robe in front of the assembly so that they could see he spoke the truth.

There is a translation of the Cula-Saccaka Sutta by Thanissaro Bhikkhu online at Access to Insight. Another good translation, by Bhikkhu Nanamoli and Bhikkhu Bodhi, is in The Middle Length Discourses of the Buddha: A Translation of the Majjhima Nikaya, published by Wisdom Publications (2005).