“Buddhists are supposed to be nice.” How many times have you heard that one? Buddhists are stereotyped as always being pleasant, soft-spoken and calm, and we aren’t always.

Of course, the Buddha taught us to cultivate loving kindness and compassion. The practice of Right Speech requires abstaining from rude and abusive language. Isn’t that the same thing as being nice?

Maybe not. Many Buddhist teachers have said that being compassionate and being “nice” are two different things. Most of the time, “nice” is mere social convention. It says nothing at all about relating to other people except on a superficial level. Even sociopaths can be nice (I have seen this with my own eyes).  Sometimes the guy who is yelling and throwing furniture around is the one who cares.

“Idiot compassion” is a term attributed to the late Chogyam Trungpa Rinpoche, although he may have borrowed it from the Russian spiritual teacher George Gurdjieff. Idiot compassion can take several forms.

The Rinpoche related it to “doing good” as an act of self-gratification.

“Idiot compassion is the highly conceptualized idea that you want to do good to somebody. At this point, good is purely related with pleasure. Idiot compassion also stems from not have enough courage to say no.”

“It refers to something we all do a lot of and call it compassion. In some ways, it’s whats called enabling. It’s the general tendency to give people what they want because you can’t bear to see them suffering. Basically, you’re not giving them what they need. You’re trying to get away from your feeling of I can’t bear to see them suffering. In other words, you’re doing it for yourself. You’re not really doing it for them.”

“Nice” is often a strategy to avoid conflict. But isn’t avoiding conflict a good thing? Not always; there are times when engaging in conflict is compassion. Sometimes the urge to be “nice” is about maintaining a polite and pleasant facade over a situation we don’t want to confront.

For example, we’ve had a few situations in western Buddhism in which a teacher was taking sexual advantage of students. And sometimes the situation was allowed to continue for some time, even after it became common knowledge, mostly because the other students thought they shouldn’t be judgmental. But sometimes issues need to be addressed, and saying the “safe” or “socially correct” thing so you can be part of the crowd is very far from Right Speech.

There is a difference between “judgmental-ism” that tears other people down to build ourselves up, and making a qualitative judgment about a situation or behavior. If “Right Speech” means we’re supposed to stand by smiling while someone kicks a dog or endangers a child, you can have it. Fortunately, that isn’t what it means.

However, a lot of us are well conditioned to keep our noses out of other peoples’ activities, and it can be really uncomfortable to speak up. It’s so much easier to shrug things off, avert your eyes, and tell yourself you are not being judgmental.

Another example of idiot compassion is responding inappropriately out of ignorance of a situation. For example, after major catastrophes such as tsunamis or hurricanes people naturally want to help. Relief organizations say the help often makes things worse, however. Well-meaning people  send cans of food from their cupboards and leftover shoes and clothes from their closets, and aid workers say sorting and distributing these things is a nightmare and a drain on their own resources. Plus, often what is sent isn’t really what is needed. If you want to help it’s almost always better to find a charity or relief organization you trust and send some money. 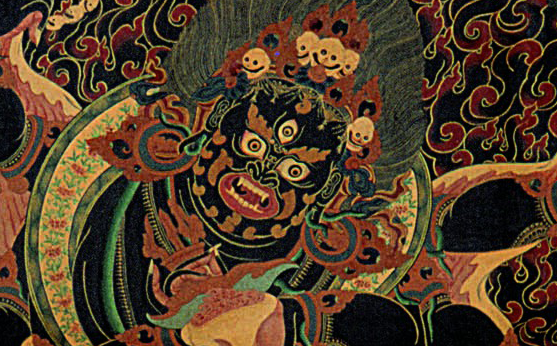 In Tibetan Buddhism, Mahakala is a wrathful emanation of Avalokiteshvara, the bodhisattva of compassion.

Genuine compassion is rooted in wisdom. Wisdom in the Buddhist sense is about not clinging to what makes us feel good about ourselves or doing what we think will make people like us. Rather, it is perceiving a situation as-it-is without our own self-interest getting in the way. Wisdom helps us respond appropriately and with a clear mind to a difficult situation.

But now let us wade into day-to-day social situations, which is where most of us are likely to trip up. You find yourself discussing a political or social issue with someone whose opinions you find genuinely heinous. Do you tell him so?

Thich Nhat Hanh provides us of an example of someone who has spoken out on difficult issues without breaking his vows. When he first came West it was to speak out against the U.S. war in Vietnam. He often faced angry people telling him he was wrong, yet he managed to not lose his composure and respond with anger. This venerated teacher advocates mindfulness training to guide our actions. Reminding ourselves that the person we’re talking to is a real human being and not just a gasbag with an opinion helps, too. But responding with compassion to hateful views doesn’t mean we can’t voice firm disagreement.

22 thoughts on “Buddhists Don’t Have to Be Nice: Avoiding Idiot Compassion”