From a Buddhist perspective, it doesn’t mean that once you’re enlightened you can fly or step in front of speeding trains without harm. Whatever your spiritual status, expect to continue to be subject to the laws of physics.

So what does it mean? To a Buddhist, “we make our own reality” could be understood in different ways, and some Buddhists disagree with the statement entirely. It’s probably the case that Mahayana Buddhists are more likely to agree with it than Theravada Buddhists. And if you do find some truth in it, you may understand the phrase in different ways as your practice matures.

The Fruits of Karma

Some of those who object to the idea of making our own reality say that it’s a misunderstanding of the first verses of the Dhammapada, a collection of sayings of the Buddha found in the Pali Sutta-pitaka. One of the early translations of the Dhammapada, by F. Max Muller, begins “All that we are is the result of what we have thought: it is founded on our thoughts, it is made up of our thoughts.” A more recent translation by Thanissaro Bhikkhu begins “Phenomena are preceded by the heart, ruled by the heart, made of the heart.”

This verse is about karma. It is said karma is created by body, speech and mind.

But in fact mind comes first; whatever we do with body and speech begins with mind — a thought or an intention.  Note that the original Pali uses variations of the word manas for “mind.”

Read More: “Manas: The Mind of Will and Delusion”

However, I think it can also be argued that karma creates our reality, or at least a lot of it. Karma is the action created by intention, and in Buddhism it’s understood that the life you have right now was built by all the choices, and the intentions, you made so far.

But when we say that karma created your reality, be clear that karma refers only to volition action. There are other natural laws in the world — such as physics — that are not affected by karma. Karma doesn’t create natural disasters, for example, but the karma of your life will affect how you handle being in one.

At this point, you might be thinking this “make your own reality” thing isn’t so cool after all. But there are other ways to look at it.

One of these ways is psychological. People who are frequently angry create a lot of problems for themselves, while someone with a generous heart may inspire generosity in others. What you project out into the world is reflected back to you by the world.

The poet Walt Whitman expressed this when he wrote.,

It is sometimes said your “outer” reality is a reflection of your “inner” reality, although the “outer” and “inner” really aren’t two separate things.

The Six Realms are sometimes interpreted to refer to personality types or mental states rather than physical places. People driven by addictions might be said to be in the Hungry Ghost realm, for example. So in this case the “realm” you are in is an allegory for your mental state. 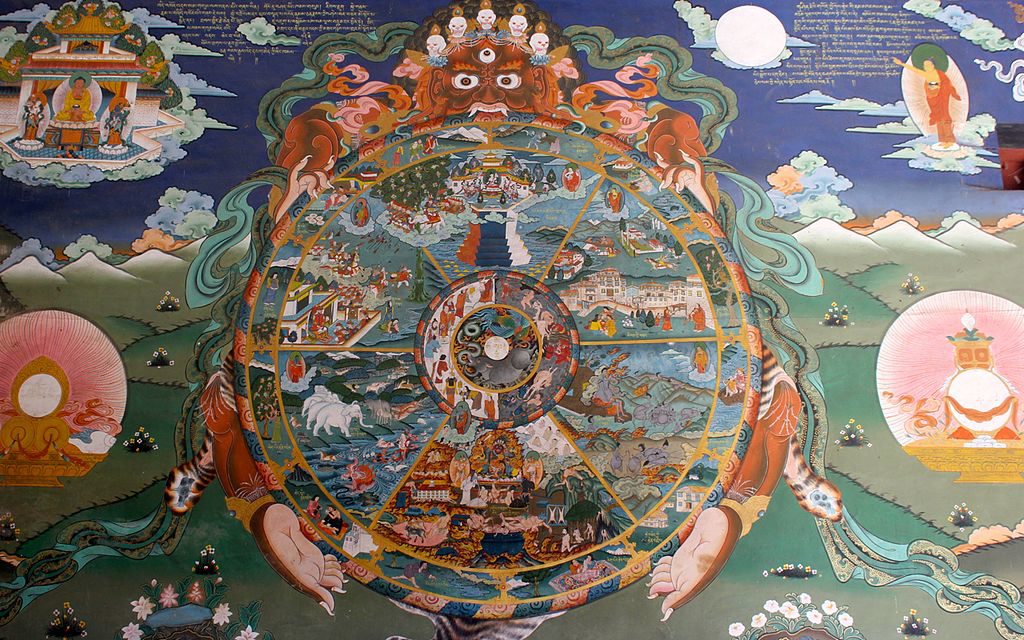 The Mahayana philosophy of Yogacara is primarily concerned with the nature of experience. In particular, it analyzes how a mental function called vijnana, awareness or consciousness, connects sense objects with sense organs to create experience. For example, vijnana intersects a visible object with the eye to create the experience of sight. Vijnana also connects perception (samjna) to ideas to create thinking.

Yogacara is a sophisticated philosophy that takes most of us a long time to comprehend. It proposes that the sense objects we see, feel, taste or hear are not “real” but are creations of vijnana.

This isn’t as off the wall as it might seem. Today’s neuroscientists say that the way we experience all the phenomena “out there” really is mostly a fabrication of our brains and nervous systems. Color, for example, is something our brains create from sensory impulses. The red in a rose is in our heads, not in the rose. This is also true of the way the rose smells and feels.

So, according to Yogacara, we really do “make our own reality”; we’re just not conscious of it.

[This article, written by me, was originally published in the Buddhism section of About.com. However, since About.com has apparently removed it from their servers, all rights revert to me.]