Amitabha Buddha is one of the most prominent “celestial” Buddhas of Mahayana. In China and Japan he is the principal Buddha of the Pure Land school and one of the most commonly represented figures in Buddhist iconography. He is also a popular object of devotion in Vajrayana Buddhism.

The name Amitabha is a compound of the Sanskrit words amita (infinite or boundless) and abha (“light”). Amitabha is the Buddha of Boundless Light.

According to tradition, many ages ago Amitabha was a great king who renounced his throne to become a monk named Dharmakara. Dharmakara vowed to become a buddha and maintain a paradise in which enlightenment was easily realized. He took 48 bodhisattva vows, pledging to help all beings on the path to awakening.

Amitabha first appeared in Buddhist scripture in three sutras — the Amitabha Sutra; the Amitayurdhyana Sutra, also called the Sutra of Infinite Life; and the Aparimitayur Sutra. The Amitabha and Aparimitayur are also called the shorter and longer Sukhavati-vyuha or Sukhavati Sutras. These sutras possibly were composed as early as the 1st century CE.

When he realized enlightenment, Amitabha came to rule the Western Paradise, Sukhavati (“the blissful”). It is a place of ease, without sorrow, in which beings may hear Amitabha’s teaching and thereby realize enlightenment. In Pure Land Buddhism, it is believed trust in and devotion to Amitabha will enable one to be born in Sukhavati, and from there enter Nirvana.

Although the Western Paradise is believed by many to be a literal place, it is also interpreted to be a state of mind. 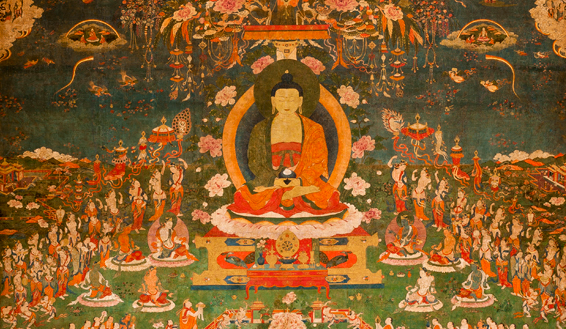 Amitabha in the Western Paradise. Detail from a Tibetan painting, ca. 1700.

Amitabha as an Icon

In the art of China and Japan, Amitabha often is depicted sitting in meditation on a lotus blossom with his hands in a meditation mudra. He may be holding a lotus. He may be dressed as a king, with crown and jewels, or as a monk. In a temple, Amithaba may have Avalokiteshvara on his right side and Mahasthamaprapta, the bodhisattva of the power of wisdom, on his left.

In Himalayan art, Amitabha usually has red skin and dark blue hair. Often he holds a begging bowl, but his robes may be made of brocade or other opulent fabric. See, for example, Amitabha depicted as one of the Five Dhyani Buddhas.

Tibetan and Mongolian artists often depict Amitabha centered in the Western Paradise, on a peacock throne and in front of a wish-fulfilling tree.

Amitayus is Amitabha in sambhogakaya form (see “Trikaya“). In Vajrayana iconography, Amitabha represents the form body (nirmanakaya) and is depicted as a buddha. He bears certain distinguishing marks, such as a cranial bump, elongated earlobes, and monks’ robes.

In sambhogakaya or “bliss body” form, Amitayus takes the appearance of a bodhisattva. In Himalayan art, this means the subject is portrayed as a young person dressed as royalty. The dharmakaya (“truth body”) form is not depicted.

The practice of liberation through devotion to Amitabha was a significant development in Mahayana Buddhism. It opened a way to enlightenment for people who do not renounce the world and enter monastic life. For this reason, the Pure Land traditions have remained popular for many centuries.