On a December night in 1999, 14-year-old Ogyen Trinley Dorje quietly slipped out of a window of Tolung Tsurphu Monastery in central Tibet. For the next two days he rode in a car driven by monks, nonstop, until they reached a rugged and isolated area bordering Nepal. From there, going by foot, horseback, helicopter, train and finally taxi, the boy and his attendants traveled unnoticed through Nepal to India. They reached Dharamsala, the seat of the Tibetan government in exile, on January 5. 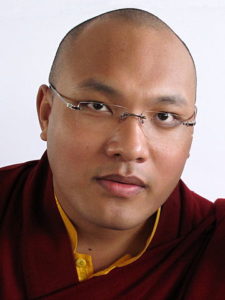 Every year, as many as 3,000 Tibetans evade guards and checkpoints and escape Tibet. But Ogyen Trinley Dorje’s escape made international headlines, because he is His Holiness the 17th Gyalwang Karmapa, the reborn head of the Kagyu school of Tibetan Buddhism. The Karmapa is the third highest lama in Tibetan Buddhism.

The teenage Karmapa arrived at Dharamsala exhausted, with blistered feet, and caught His Holiness the Dalai Lama by surprise. The defection also caused great consternation for the governments of China and India.

China had barred the Karmapa from leaving Tibet, and the defection was an embarrassment for Beijing. The government of China had hoped that a loyal and compliant Karmapa would help legitimize China’s rule over Tibet. Instead, once in Dharamsala the teenager spoke out about Tibet’s lack of religious freedom.

The government of India faced a dilemma. China warned India that granting asylum to the “living Buddha” would jeopardize relations between the two nations. But much of the rest of the world supported asylum for the Karmapa. New Dehli wavered for over a year before granting refugee status to the Karmapa in February 2001.

Kagyu is one of the four main traditions of Tibetan Buddhism. It is based on teachings brought to Tibet from India by Marpa Chokyi Lodoe (1012-1099). The first Karmapa, Dusum Khyenpa (1110-1193), founded a school of Kagyu called Karma Kagyu. The Karma Kagyu school claims an unbroken lineage of reincarnations of the Karmapa, the oldest such lineage in Tibetan Buddhism, to the present day.

After the Chinese invasion of Tibet in 1950, the 16th Karmapa, Rangjung Rigpe Dorje, tried to continue his work in Tibet. But the situation in Tibet became increasingly unstable and dangerous. The 16th Karmapa, with a number of Karma Kagyu monks and teachers, left Tibet in 1959, as did His Holiness the Dalai Lama. The Karmapa took the most sacred objects and artifacts of the Karma Kagyu lineage out of Tibet, also. The Karmapa established his new seat outside Tibet in Rumtek, a monastery in Sikkim that the 9th Karmapa had founded at the end of the 16th century.

Also, as the various traditions and schools of Tibetan Buddhism relocated outside Tibet, the Tibetan government in exile decided some administrative consolidation was in order. The government in exile appointed the Karmapa to be head of all schools of Kagyu, not just Karma Kagyu. Until his death in 1981, the 16th Karmapa provided leadership and teaching to the Kagyu tradition in exile.

The Karmapa lineage is said to be self-announced, because each Karmapa leaves a letter predicting his next rebirth. Eleven years passed before the letter left by the 16th Karmapa was located. The letter provided a location, also seen by His Holiness the Dalai Lama in a dream, and the names of the next Karmapa’s parents. By means of these predictions, in 1992 a seven-year-old named Apo Gaga was identified as the 17th Karmapa.

The 17th Karmapa was born in eastern Tibet on July 26th, 1985. After his identification he was taken to Tolung Tsurphu Monastery and enthroned there in September 1992. He studied Buddhism at Tsurphu until his escape in 1999. By all accounts His Holiness is an intelligent, serious and sincere young man with particular interest in protecting the earth’s environment.

The Other 17th Karmapa

Although Ogyen Trinley Dorje has been accepted by a majority of Kagyu lamas and monasteries and by the Dalai Lama as the legitimate Karmapa, a substantial minority recognize another young man, Trinley Thaye Dorje, born in 1983 in Lhasa. Trinley Thaye was identified as the Karmapa by another reincarnated Karma Kagyu lama, the 14th Sharmapa, Mipham Chokyi Lodro. Trinlay Thaye Dorje escaped from Tibet in 1994 and currently lives in Kalimpong, India.

A great many devout and sincere people make elaborate arguments about the legitimacy of one Karmapa over the other. There are myriad accusations, claims and counterclaims. Ogyen Trinley, however, has the recognition of both the Dalai Lama and the government of China. Indeed, he is the only living tulku (reincarnated lama) to be so recognized; the Dalai Lama and China don’t agree on anyone else. Although previous incarnations of the Karmapa did not depend on China’s or the Dalai Lama’s recognition, the combined weight of their authority does give Ogyen Trinley an advantage.

Robert A. F. Thurman, professor of Buddhist studies at Columbia University, was asked about the controversy during Ogyen Trinley’s first visit to the United States. “The other Karmapa is a nice person, and he has followers in Europe and Asia, but almost all of the Tibetans accept the Karmapa who is here now,” he said.

Although one hates to accuse the high officials of a major Buddhist school of being greedy, it appears the real bone of contention is over control of Rumtek Monastery and the many priceless art treasures, artifacts and relics therein.

Looking to the Future

His Holiness the 14th Dalai Lama was born in 1935. Although he is healthy as of this writing, his age gives concern to what will happen to Tibetan Buddhism once he is gone.

The lineage of Tibet’s second highest lama, the Panchen Lama, appears to be broken. The 10th Panchen Lama died in 1989. On May 14, 1995, the Dalai Lama identified a six-year-old boy named Gedhun Choekyi Nyima as the 11th reincarnation of the Panchen Lama. By May 17 the boy and his parents had been taken into Chinese custody. They have not been seen or heard from since. The Chinese government enthroned another boy, the son of a Communist official, in his place.

Understandably, the government’s Panchen Lama is not considered legitimate by most Tibetans. His Holiness the Dalai Lama is deeply concerned that the Communist government of China will enthrone a false Dalai Lama when he is gone. (See also “China’s Outrageous Reincarnation Policy.”) He has spoken of either choosing a successor before he dies or of being the last Dalai Lama.

The Dalai Lamas, heads of the Gelug tradition of Tibetan Buddhism, have been spiritual and temporal leaders of Tibet since the 17th century. Before that, at different times the heads of either the Kagyu or Sakya traditions held that authority. Back in the day the monasteries’ power was based on strategic alliances with various Mongol warlords.

Today there is speculation that before he dies, the Dalai Lama might name the third highest lama, the Karmapa, as the new spiritual leader of Tibetan Buddhism. This would be extraordinary, as this authority has never changed hands peacefully. But these are extraordinary times.