(This post follows the last post, on the Axial Age. Some of this post was condensed and adapted from my book, The Circle of the Way: A Concise History of Zen from the Buddha to the Modern World [Shambhala, 2019].)

Although it wasn’t his intention, Alexander the Great (356–323 BCE) touched off a series of events that put Buddhism on the map, so to speak.

Alexander set out to conquer the world. Although he fell short, at its peak his empire stretched from Europe to the Indus Valley, and dipped into Egypt. The campaign stalled when he reached the Punjab in 326 BCE, however. Alexander had planned to push farther east into the Kingdom of Magadha. But his weary soldiers had heard stories of the vast army of Magadha, and they imagined the mighty Ganges lined with thousands of fresh troops and trumpeting war elephants. They refused to go on, and so Alexander’s legendary conquests ended in the Punjab, and he died three years later in Babylon.

While Alexander was stalled in the Punjab, he was accompanied by a local mercenary named Chandragupta Maurya. In 321 BCE Chandragupta succeeded where Alexander failed by seizing the throne of Magadha. The enterprising Chandragupta expanded his new Mauryan Empire to fill most of modern-day India and a portion of what is now Bangladesh.

After Alexander’s death, the conqueror’s vast territories were claimed by his Macedonian generals. One general, Seleucus I Nicator (ca. 358–281 BCE), came to rule a large part of what is now Turkey and much of today’s Iraq, Iran, Kuwait, Turkmenistan, Afghanistan, and Pakistan. Seleucus encouraged Greek settlements in his vast territory. These settlements, combined with those left behind by Alexander, introduced considerable Greek influence into west and central Asia.

In 305 BCE, Seleucus marched on Chandragupta’s empire. This adventure did not go well for Seleucus, and the Mauryan Empire grew to include much of modern-day Pakistan and Afghanistan as a result. Chandragupta abdicated to his son Bindusara in 297 BCE. and retired to be a Jain ascetic. After Bindusara came Ashoka, whose reign began about 268 BCE. 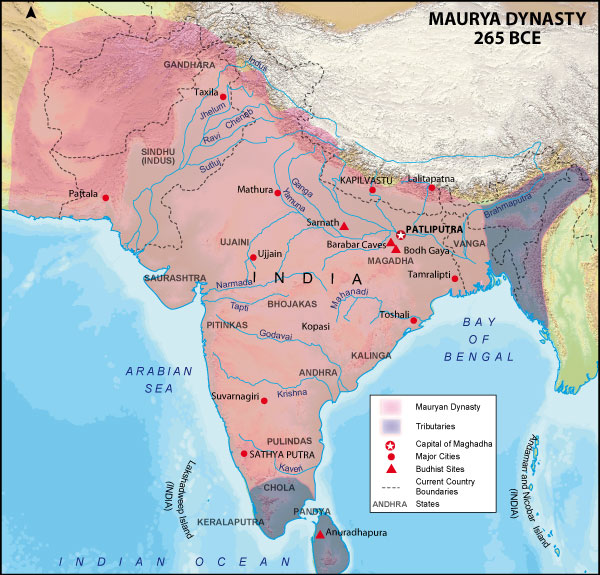 Ashoka the Great (ca. 304–232 BCE) is remembered as a brutally ruthless military conqueror—until about 260 BCE, that is, when he beheld the bloody results of his conquest of Kalinga (near today’s Orissa). In one of the great conversion stories of all time, Ashoka renounced war and conquest and declared that his rule would be guided by the Buddha’s dharma. We know this because Ashoka’s story is told in his own words on the thirteenth of fourteen major “rock edicts” inscribed on boulders and sometimes in caves throughout his empire, along with other sorts of inscriptions. Edicts also were carved on magnificent stone pillars, forty to fifty feet high, which were topped with elaborately carved animals, most often Asian lions. These also often were carved with a dharma wheel, the symbol of Buddhism, with 24 spokes. 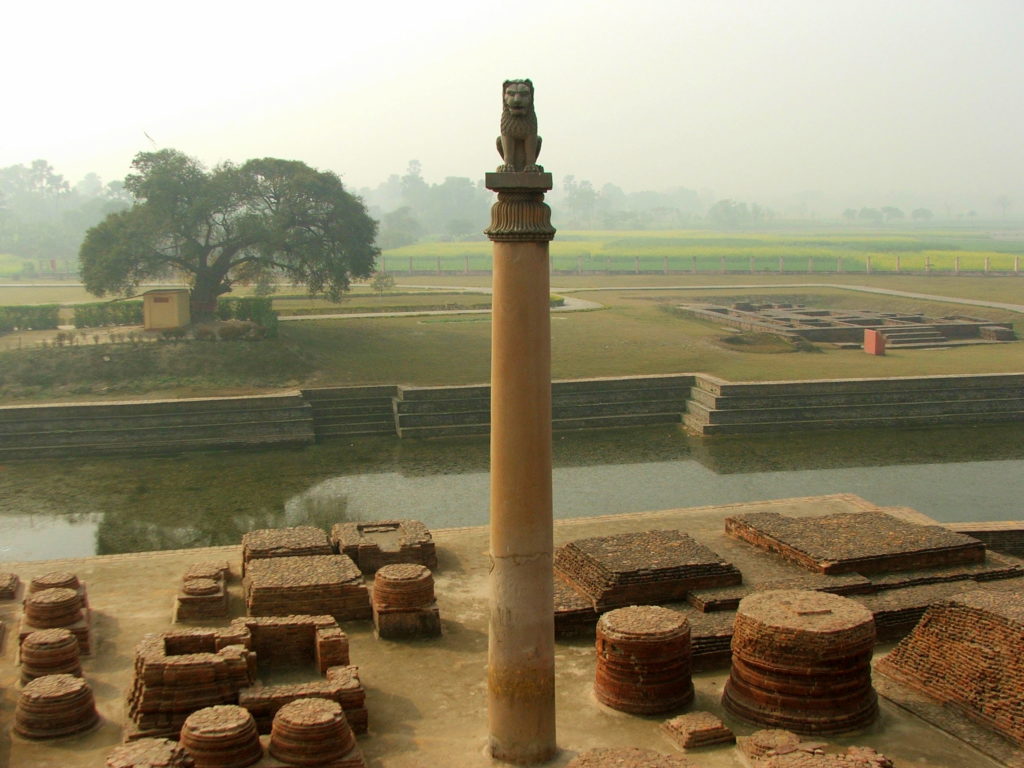 Ashoka’s edicts have been discovered in Afghanistan, Pakistan, Nepal, and Bangladesh, as well as India, written in the local languages of the time. Edicts in the western Mauryan empire were in Greek, and one inscription discovered near Kandahar in 1958 was written in Greek and Aramaic.

In his edicts Ashoka proclaimed his faith in the Buddha and his dharma, but he did not attempt to teach Buddhist doctrines. In fact, all religions were welcome in his empire, he said, as long as they respected each other. The emperor was more interested in the way people manifested the dharma in their behavior. In the second pillar edict, for example, he said, “Dhamma is good, but what constitutes Dhamma? (It includes) little evil, much good, kindness, generosity, truthfulness and purity.”

Ashoka also used dharma as a diplomatic tool, sending emissaries carrying his edicts to the rulers of other states, near and far, including the Seleucid Empire, Egypt, Greece, and the island that is today’s Sri Lanka (“Tamraparni”). The mission to Sri Lanka, at least, was a rousing success.

In the fifth major rock edict, Ashoka declared he had appointed dharma mahamatras—dharma officials—to work among the Greeks and other people in his western territory. The mahamatras were charged with the promotion of dharma and the welfare and happiness of all those devoted to dharma. This is significant because, after Ashoka, Buddhism would blossom on the western territories of the Mauryan Empire—today’s Pakistan and Afghanistan.

Ashoka’s words on generosity and religious tolerance and his concern for the welfare of his people are inspiring to read even today. Yet it appears there was some pushback from the Brahmins, who may have felt put out by Ashoka’s call to end animal sacrifices. After Ashoka’s death in 232 BCE, his several heirs who hadn’t been ordained showed no interest in the dharma and instead spent the next forty-seven years squabbling over the throne, while such outer provinces as Gandhara, Kashmir, and the Punjab broke away. The last Mauryan ruler was assassinated by an ambitious general during a military review in 185 BCE.

The many rock and pillar edicts remained scattered through much of Asia. However, those written in the various Indo-Aryan languages of his time used a written script that fell out of use, and people forgot how to read it. And the memory of Ashoka himself was lost in India, although he was honored in Sri Lanka. During the Mughal reign of India, 1526-1720, some of the pillars were put to use supporting minarets. When traders of the British East India Company arrived in the 18th century, they were told the pillars were the abandoned walking sticks of a giant. But an East India Company official named James Prinsep deciphered the script in the 1830s, and the story of Ashoka the Great was heard again in the world, at long last.

And when India became an independent nation in 1947, Ashoka’s 24-spoke dharma wheel was placed in the center of the new nation’s flag.