The Mahabodhi Temple at Bodh Gaya marks the place thought to be where the historical Buddha realized enlightenment. It is arguably the most important of the holy sites related to the life of the Buddha. In spite of its significance, however, much about the temples history has been lost to time. And the temple today is an object of contention between India’s two great religions, Buddhism and Hinduism.

Bodh Gaya is in the Bihar state of north eastern India, bordering Nepal. Buddhist history says that it was here that the Buddha realized the way to liberation from suffering would be found in mind and not in aestheticism, and he sat in meditation under a pipal tree (Ficus religiosa), called the Bodhi Tree, until he realized enlightenment. Historians arent certain exactly when the Buddha lived, but the enlightenment probably happened late in the 5th century BCE.

Read More: The Story of the Buddhas Enlightenment

According to Buddhist history, the first small temple at Bodh Gaya was built by the Emperor Ashoka, a patron of Buddhism who reigned most of what is now India and a great deal more from about 269 BCE to 232 BCE. This temple may have been replaced in the 1st or 2nd century CE. The current temple probably dates to the 5th or 6th century CE, and it remains one of the oldest brick structures in India.

As centuries passed Buddhism declined in India for a host of reasons, and Hinduism became the dominant religion.

In the 12th century northern India was invaded by Muslim Turks, and the area had Muslim rulers for the next several centuries. The Mahabodhi Temple fell into neglect. By the 15th century it had been completely abandoned by Buddhists. 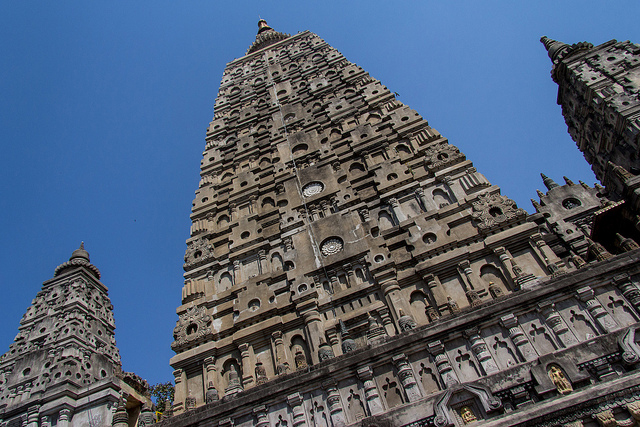 The revival of Mahabodhi came from an unlikely place — Britain. Great Britain ruled India from 1757 to 1947, a period of history called the British Raj. In the late 18th century assignments to India were highly sought after by young English gentlemen seeking fortunes or adventure.

In the mid 18th century the religions of India and southeast Asia had seemed just a hodgepodge of idolatry to Europeans, but the British adventurers began to sort it out. For example, in 1797 a British surgeon named Dr. Francis Buchanan published an account of Buddhism that used the English word Buddhism for the first time in print.

In 1811 this same Dr. Buchanan and a group of assistants traveled to northeastern India and came upon a crumbling ruin of a temple inhabited by Hindu ascetics. Dr. Buchanan recognized that the weathered stone carvings of the temple were images of the Buddha. The Hindu ascetics had treated the old temple with respect but had no idea of its original significance. With much sleuthing Dr. Buchanan learned that the temple had once been a great center of Buddhism, but it wasnt clear to anyone why. It would be a few more years before the significance of the Mahabodhi Temple was fully appreciated by either the British or Indians.

By the 1880s British and other travelers were publishing accounts of the deplorable state of the temple, and the British government undertook a restoration. This drew the attention of Anagarika Dharmapala (1864-1933), a Buddhist activist of what was then British Ceylon. Dharmapala campaigned to have the temple returned to Buddhist control, a request that met with resistance from Hindu clergy. Hindus had come to regard the Buddha as an incarnation of Vishnu and considered it to be their temple, too.

Eventually a compromise was reached — control of the temple was taken over by the state government of Bihar, which established a management committee to be made up of five Hindus (including the chair) and four Buddhists. The Bodhgaya Temple Management Committee still is in charge today, although in 2013 policy was changed to allow the Gaya District Magistrate to act as chairman even if he isnt Hindu. There is also an advisory committee that includes representatives of Buddhism from several other countries.

Still, to this day there are Buddhist activists calling for Mahabodhi Temple to be returned to Buddhists.

The temple today is a UNESCO World Heritage site.  According UNESCO, the present temple is one of the earliest and most imposing structures built entirely in brick from the Gupta period. The temple complex covers nearly 12 acres; the main pyramid temple is 180 feet tall. Next to the temple is a huge pipal tree said to be a direct descendant of the Buddhas Bodhi Tree.

For a first-person account of a visit to Mahabodhi, see Review of Mahabodhi Temple at Bodh Gaya by About.com India Travel Expert Sharell Cook.